I was in Zurich 2 weeks ago for the ICT for Sustainability conference. I was pleasantly surprised by how much I liked it there so I thought I would big it up. 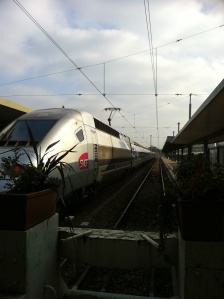 Zurich is easy enough to get to with the Eurostar and the TGV (I booked via Loco2). The journey takes about 8 hours, which is plenty of time for some pleasant hacking/reading/looking out the window, with a stopover for lunch in Paris. Its really straightforward and quick to change at Paris as long as you follow the advice given on the Man in Seat 61 website (which co-incidentally was the seat I end up in on the TGV between Paris and Zurich!).

The city itself is in pretty good nick, presumably as it has been trashed in any of the numerous conflicts that the rest of Europe has had. There are trams everywhere including this one by the university that goes through a building. 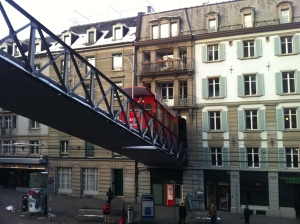 The university where the conference was held was pretty grand too: 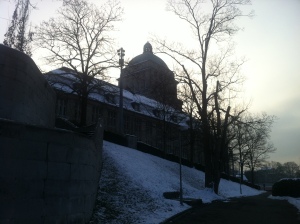 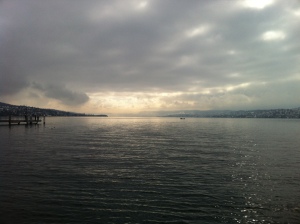 On the Saturday I took a walk by the lake which is a close to the centre of town. Along the edge of the lake there is a few interesting buildings, including the Le Corbusier house (he is also on the money) and a Chinese Garden.

I ventured over to the old industrial side of town later on to visit the MFO Park, an old factory that has been converted into a park area. The mix of the industrial features is very well done and you can climb stairs to the top for views of the surrounding area.

By co-incidence I was in town during Carnival, which proved that the swiss do know how to party (or at least drink lots of beer and do brass band covers of sixties tunes.)

Candidates are currently campaigning for the by-election to Lambeth council in the Brixton Hill ward where I live. Previously, council elections have just passed me by, but this one has caught my attention a lot (perhaps because its January and not much else is going on).

I have been following some of the candidates on twitter and UKIP candidate Elizabeth Eirwen Jones especially stood out. Her policies in support of cars seemed totally out of touch with the area I live in. It was like she was from another planet. After checking Lambeth’s council website which lists the addresses of each candidate it turns out she does live on another planet – planet Clapham.

Not so local candidates 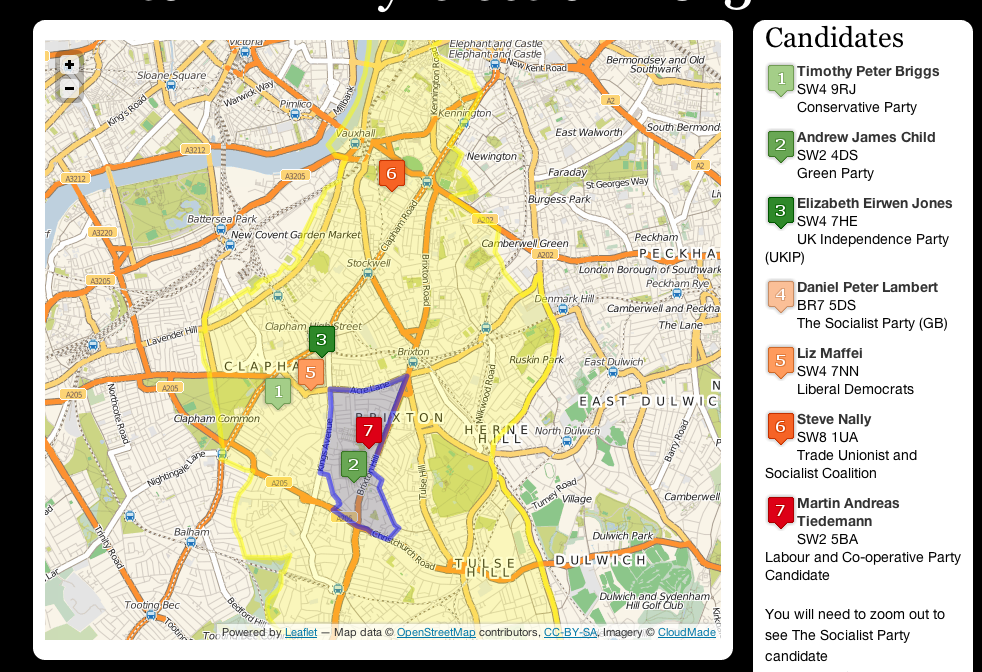 In fact out of the 7 candidates only the two front runners Andrew James Child (Green party) and Martin Tiedemann (Labour) live in the ward. Three of the others live in Clapham and one lives in Vauxhall. But at least they live in Lambeth – one candidate Daniel Lambert (The Socialist Party) lives many miles away in Chislehurst. 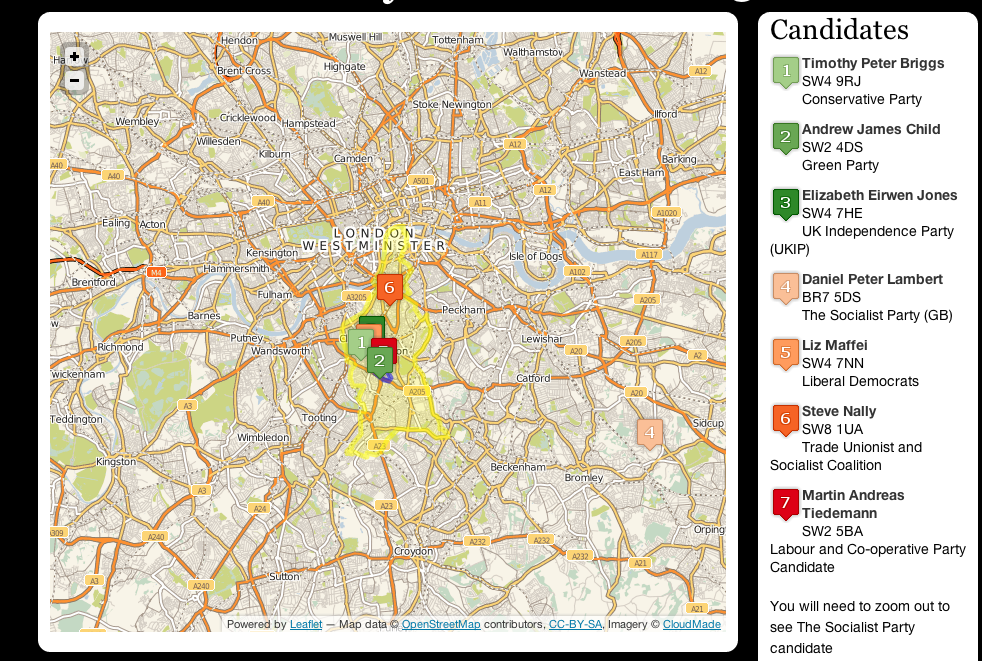 I built a little website to visualise the candidate addresses using the leaflet.js javascript library that runs on top of OpenStreetMap. I got borough and ward overlays from MySociety’s MapIt project. The code is on github.

Two weeks ago I went to VergeCON London a conference that brings together people from different background to discuss the convergence of sustainability, technology, transportation and cities. It was a great event because of the opportunity to have discussions with people from such diverse backgrounds (science, non-profit & industrial).

The opening keynote and panel focused on some of the big challenges we will face creating a more sustainable infrastructure. Unlike IT, changes to our energy system, buildings and transport infrastructure are long-term – the existing grid for example took over 50 years to build. More and more IT will make our infrastructure smarter but will also inevitably add more complexity.

Sustainability is not something business can ignore – as highlighted by the fact that over recent months many of the world’s biggest corporations had to restate earnings based on raw material prices. To make sustainability work in large corporations requires system thinking, busting silos, bridge building and radical efficiency. The challenge is even bigger for cities. New cities were described as “fun but not relevant”, as the majority of us live in old cities that will need to make dramatic transformations. Some US cities now have chief innovation officers to help make these changes.

There were 2 interactive sessions during the day. The first one was an “introduce yourself to your table” session and a great way to get to know other conference attendees. The second session split the attendees into areas of interest. I joined a session with some of the guys from Navetas about energy management. The consensus was that energy monitors are very useful initially but once the you had learnt where your big energy losses are the novelty wears off and they often get stuck in a cupboard somewhere. Current energy monitors designs are very geeky and don’t communicate well to ordinary people. What may be lacking from energy management and home automation solutions is completeness. We have a collection of bits that don’t add up to a full solution that can intelligently manage the energy in the home.

Rather than have long 1 hour talks, there were several short One Great Idea TED style talks. Here were some of my highlights:

AlertMe – Get some energy visibility!

Pilgrim Beart from AlertMe gave a really entertaining talk (using a couple of bags full of plastic balls) about where the energy use in your house goes. The key point: there is a bubble of ignorance about energy use due to a lack of visibility. Home energy monitors/displays can help reduce that usage by 8%. Even bigger gains can be made by tackling heating. Pilgrim has saved hundreds of pounds a year by using a more efficient shower head and intelligent thermostats like the ones provided by Wattbox can yield saving of 15%.

Vinay Gupta from WhipCar gave a good talk on their car sharing startup. I don’t drive but I found this an interesting story of how sharing enabled by the web is taking off in a big way. Whipcar have created a hyper local service where in London where you are never more than 10 minutes walk away from a potential rental car. We have an excess capacity of cars and people view them as an assets that is losing money when not in use. The demographics of people using the service are mainstream (mid 30s) both on the supply and demand side. The hard part of building such a service was assessing the risk of the people who sign up and providing around the clock support in case something goes wrong.

Josh Henretig from Microsoft talked about how their initiative to become carbon neutral this year. I was surprised how much I enjoyed this talk and it is definitely inspiring me to push the same idea at Forward. To improve building efficiency they are using big data techniques to give building managers insight into what improvements to take. To offset the energy usage of their data centres they have made big investments in renewables. When staff fly their business units are now charged a carbon price.

A fitting closing keynote came from John Elkington who talked about his new book The Zeronauts. His core message was that we need some unreasonable people to start building business that have zero environmental impact to really push sustainability.